Shopping For Great Electronics During A Riot

As the saying goes, "Never let a good riot opportunity go to waste". That seems to be the mantra of many of the people who have participated in riots throughout the past year. I understand the frustration of people in places like Ferguson, Missouri,  Baltimore, Maryland and many other places that have seen injustice year after year.

Inequality, whether racial, financial or any other reason, is unacceptable. Civil disobedience is the result of such injustice. Many people who participated in the riots were not there to protest injustice but rather to take advantage of a terrible situation for their gain. 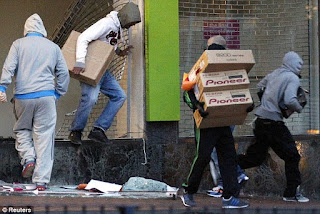 I totally support anyone's right to protest in a peaceable manner. I understand that tempers fly and discussions get heated but at no time is it alright to break into anyone's business and steal from it. at no time is is alright to burn a business, house or any other property because you are upset. Especially in your own neighborhood. Tearing down the place you live, no matter what the conditions, is just plain stupid.

I never get upset if people protest. In fact I encourage it when injustice is uncovered. Remember, this country was founded on civil disobedience against an unjust government. Standing up to injustice is in our blood, our psyche.

Please shine a bright light on any injustice. Push that injustice into the light of day for all to see. But please do not let that light emanate from a stolen television or a fire at the local drug store.

Randy
Posted by Unknown at 2:10 PM No comments:

Political Correctness parading as Humanity is one of the major faux pas of our time. We have reached a point where we care more about someone's feelings than we do about doing the correct thing. 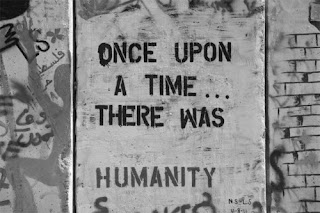 In reality no matter what we say or do someone may be upset. These days living our lives is a crap shoot of walking on the egg shells of Political Correctness. Things that seem right have suddenly been turned upside down and called wrong or hurtful to others.

I guess I should not say 'suddenly' as this process has been building for decades. Starting in the 60's, of our last century, we seem to have lost a sense of good and evil, of funny and hurtful.

We do not allow God in schools because it may upset some atheists but care little about upsetting the religious community. We can not call the terrorists,  that live their lives to kill us, Islamic terrorists because it might make them angry at us. GUESS WHAT? They already are and no amount of Political Correctness will change that fact.

We no longer can say Merry Christmas and have to substitute Happy Holiday in its place. That even pisses me off and I am not a Christian. I believe that, given enough time and idiocy, December 25th will become a day of families eating together while on Skype so they can see each other from their receptive homes. God forbid we actually interact with each other in an in person manner.

Sorry; that should have been 'Some Higher Power Who Is Not God. Maybe Just A Super Hero Like Superman' Forbid. WHEW!! That will get the Political Correctness Police off my back, lol.

We judge people and things, from centuries past, on the basis of how our society thinks today. Columbus was evil because he acted like a man living in his time. The Confederate flag is evil because once it represented the south in the Civil War. Some people are expunging ancestors from their family histories because they did things that were normal in their lifetimes but Politically Incorrect now.

What is lost here is the 'Rule Of Common Sense'. I see comedians do foul mouthed shows where if they were deprived of the use of the work 'FUCK' they could not do there act. And yet this seems to be Politically Correct. But let a white comedian use the word 'Nigger' and the Political Correctness Police are crucifying them with the handle 'Racist'.

I crave the days when I could tell a joke about 'The Taint, The Grundle, The Fleshy Fun Bridge' and not have a million emails telling me that in one joke I have insulted women, men, gays, laws against sodomy, the Christian right, the liberal left and The Holy Bible Itself.

Randy
Posted by Unknown at 10:40 AM No comments: