It seems that every storm, of significant size, is now given a name, by what passes for news reporters, to help sensationalize it for public consumption.  The Storm of the Century, Snowmageddon and Snowapocolypse are tossed around freely like they are terms we need to embrace blindly and with brain cell loss enthusiasm. My Second Life partner is calling it Snow San Andreas  Fault. 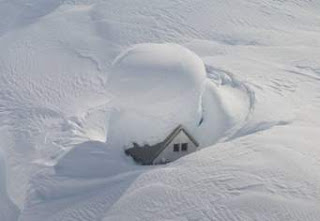 I am calling it The Snow Rapture. Not because I believe that people will disappear but rather because commodities disappear at a brisk pace.  Although some fools will get in their cars and head off to do donuts in the Walmart parking lot and never be seen or heard from again.

Yesterday I witnessed the rapture of bread, milk, generators, snow shovels, deicing agents  and other essentials required to survive a snow storm. There were reports of beer, wine and liquor being  raptured (yes I made the word rapture a verb)  from stores located in the path of this God send of a storm.

My only explanation for this alcohol rapture phenomenon  is that people think they will be snowed in for months forcing them to eat their neighbors to survive after their supplies run out. The Donner Party cook book does state that alcohol is a human tenderizer and that alcohol is the perfect  beverage to wash down Homo Sapiens steaks and ribs. Thankfully I do not know my neighbors. There are a few tasty  morsels, that walk by the house in the evening, but that is a subject for another day.

So here I sit waiting for 3 pm, because that is the start time the weather people have given us. We have bread, milk, coffee, soup, many varsities of snacks, snow shovels, deicing agents and a list of television shows we want to catch up on.

We have no alcohol as we do not drink. I guess we will have to devour our neighbors untenderized  and suffer through a rough chew.

If we survive the Snow Rapture life will return to normal in no time. I hope.

Wouldn't this be a perfect time for someone to start The Zombie Apocalypse?